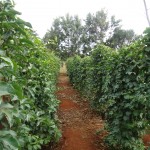 Kenya has lost part of its global market share in horticulture in the last five years. According to a new study, despite a jump in exports of fruits and vegetables from 100,000 tonnes in 1997 to 350,000 tonnes in 2013, Kenya’s global market share fell to 1.23 per cent last year from 1.28 per cent in 2008, says the Global Competitiveness Study by USAID and the Financial Transactions and Reports Analysis Centre of Canada read more >>>>